This post is part of a series in which I describe the twenty-four books I read in 2017 for Book Riot’s Read Harder Challenge.

Task: Read a book that is set more than 5,000 miles from your location.

Alternatives: Read a book about sports. Read a travel memoir. Read a book in which a character of color goes on a spiritual journey.

I’m taking a stab at Book Riot’s Read Harder Challenge this year, the first task of which is to read a book about sports. I clean up in Trivial Pursuit except for that damned green pie piece, and sports narratives, real or printed, just don’t do a whole lot for me.

I felt like I’d found a way around this initial hurdle, though, when I came across Touching My Father’s Soul: A Sherpa’s Journey to the Top of Everest by Jamling Tenzing Norgay. I’d gotten entirely fixated on Himalayan mountain climbing during my maternity leave (as one does), and it sounded like a perfect workaround to having to read an entire book about sports.

I’d just been through an intense physical struggle culminating in a burst of euphoria that was completely unprecedented in my entire life experience, and summit stories felt like satisfyingly parallel narratives (I guess?). Still, though, after lots of bleary-eyed 3 am internet vortexing on the subject, I’m not at all convinced that climbing the tallest, hardest peaks is a worthy use of one’s time or resources. It seems like such an arrogant and wasteful risk and the cause of completely unnecessary damage to a fragile environment. Which brings me to Mount Everest.

Everest isn’t the most challenging of Himalayan peaks – K2, Kangchenjunga, Nanga Parbat, and Annapurna all have higher casualty rates. Everest just happens to be the tallest. And it’s not like Everest is exactly head and shoulders above the rest – Kangchenjunga was thought to be the tallest mountain in the world until the 1850s, when it got bumped down to third place after Everest and K2.

Still, Everest can definitely kill you. Avalanches, storms, earthquakes, equipment failure, exhaustion, and stupidity are unrelated to the size of your cash deposit. However, during the 2016 season, there were only six deaths and over 300 successful summits, and that’s not bad for  29,029 feet above sea level.

I don’t think anyone but a very serious mountaineer is going to attempt to scoot up, say, K2. Everest is different, though. A “guided client” may or may not have the foggiest idea of how to climb an eight-thousander, but s/he definitely has $50,000 or so to throw at the concept. Some of that money pays for guides and porters. These people assume most of the risk. They’re the ones who handle logistics, haul gear, and fix lines – you know, the stuff that makes mountain climbing hard. For the client, the privilege of standing on the Everest summit isn’t necessarily the culmination of serious training or a demonstration of skill; it’s a combination of funding and meteorological luck.

[Note: I do recognize that I am probably physically incapable of getting up Mount Everest, with or without an army of local babysitters and probably have no business being so vocal in my criticism here. But it’s my blog.]

It’s also a practice that’s completely trashing the mountain (26,500 pounds of human feces per season!). And you could die doing it. Or worse, you could get other people killed. 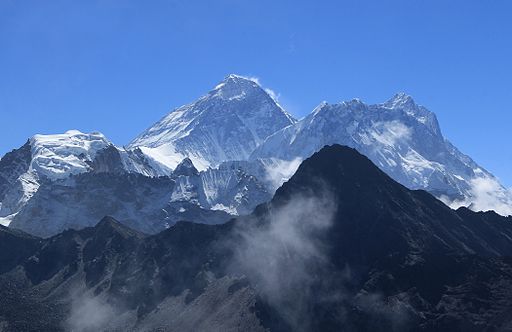 Sure, there’s a romantic notion of standing atop the wildest, loneliest spot in the world and coming face to face with the vastness of the world, but take a look at this queue on the Hillary Step, which looks about as romantic as buying toilet paper at 5:30 pm on a weekday, if standing in the grocery store line could kill you if you stood still long enough.

So there are tons and tons of Everest memoirs out there, and many of them center on the 1996 season in which a whole passel of people died. Jon Krakauer’s Into Thin Air is probably the best known, but there are at least eight other published accounts. I was very excited to find Touching My Father’s Soul, written by the son of Tenzing Norgay, who along with Edmund Hillary was the first to summit Everest in 1953. Jamling followed his father’s footsteps up Everest in 1996, and his account offered a Sherpa perspective on the mountain and the people who climb it.

I especially enjoyed his matter-of-fact presentation of Sherpa culture and Tibetan Buddhism, both subjects that tend to leave the most well-intentioned of western writers spewing breathless exoticisms. Instead of that, we get tidbits like Sherpa gallows humor – looking into a crevasse in the Khumbu Icefall is referred to as “peering into America” and falling is “getting a visa to the United States.”

Every so often, Norgay throws out a positively tantalizing detail like this:

At college in Wisconsin my grades were poor, and I got into a certain amount of trouble. When I walked alone down the small town streets, young guys would roll up beside me in a pickup, stick their head out the window, and call me “chink” and other names. I admit that at the time I enjoyed taking them on and generally beating the crap out of them, though this kind of response nearly got me thrown out of school (289).

Now, I could have stood to read a LOT more about this Buddhist Sherpa teenager single-handedly beating up truckloads of racists in rural Wisconsin, but alas. Norgay instead focuses on the spiritual journey he underwent in addition to the physical trek up the mountain, in which he rediscovers his Buddhist faith after a period of agnosticism and reconciles himself with the memory of his father.

The disasters on the mountain that killed several climbers are covered, though Norgay himself experienced them secondhand through the Advance Base Camp radio. The tragedies only account for about seventy pages worth of the book, with the rest focusing on Norgay’s summit, interwoven with the story of his father’s ascent. And it really works. There’s a very nice moment where Norgay contemplates stratified snow layers and counts down to the layer his father likely walked across. The constant shadow of his father’s journey is pretty moving, as well as historically interesting.

The book includes several extended passages of Buddhist philosophy, especially in the last few chapters. And this is not the defanged yoga class Buddhism you run into on Instagram. It’s very ritual-intensive, and involves sincerely held beliefs in deities, reincarnation, and prophecy. While Norgay is describing a physical journey up the mountain, he’s also recounting his spiritual journey from skepticism back to devout Tibetan Buddhism. Some of this was admittedly difficult reading for me; I’m not a religious person, and I’m left cold by appeals to the inherent scientific logic of faith systems.

Still, some of it is just lovely:

In the mountains, worldly attachments are left behind, and in the absence of material distractions, we are opened up to spiritual thought. When we look out at the ocean or gaze at the sky and the clouds, or even the rock wall of a mountain, it is difficult for our minds to form labels. What is it really that we are looking at? There is no real thing here – just color and shape. And when we stop attaching labels to what we see, a sense of quietness flows in to fill the gap, bringing us a step closer to the understanding of emptiness (218).

Even a heathen like me can get behind that.

There’s a good deal of discussion of motivation for climbing Everest, and Norgay understands the attraction, both as an individual with deep cultural and personal ties to the Himalayan peaks and as a serious climber himself. However, he is pointedly critical of climbers who approach the mountain with arrogance and disrespect. There may be a way to preserve a meaningful Everest experience after all, but not if standing on the summit continues to be viewed as a transactional moment.

So that’s 1,000+ words to say, this book was a really interesting read and I recommend it. I also really want to visit the Himalayas. And maybe Base Camp. But just Base Camp for me, and I promise to pack out my own waste.